It takes a village to tame a beast!...ha!

"Don't fling jelly" did those words just come out of my mouth?

If you've followed my Facebook page you know that I'm an Aunt to 3 kiddos. Creek Canyon ( age:8), Paisley Golden (Age:4), and then the little dumpling Coral Mae (age: almost 2).

Summer is in full swing, and if you can imagine having 3 kids that love to be outside, you know that it takes a village to keep them all tracked down. Being the aunt, I like to think of it as "Herding Feral Cats"

If you've ever tried to herd a bunch of feral cats, you know that it's quite the under taking. It's best to divide and conquer. That's where the village comes into play. I've been nominated as the 'Village Go-To" lately when the little dumpling (AKA; Coral Mae) needs someone to keep her occupied while my sister and brother in law try to catch a little break once in a while, or grocery shopping. I mean who wants to herd cats in a grocery store? ha! 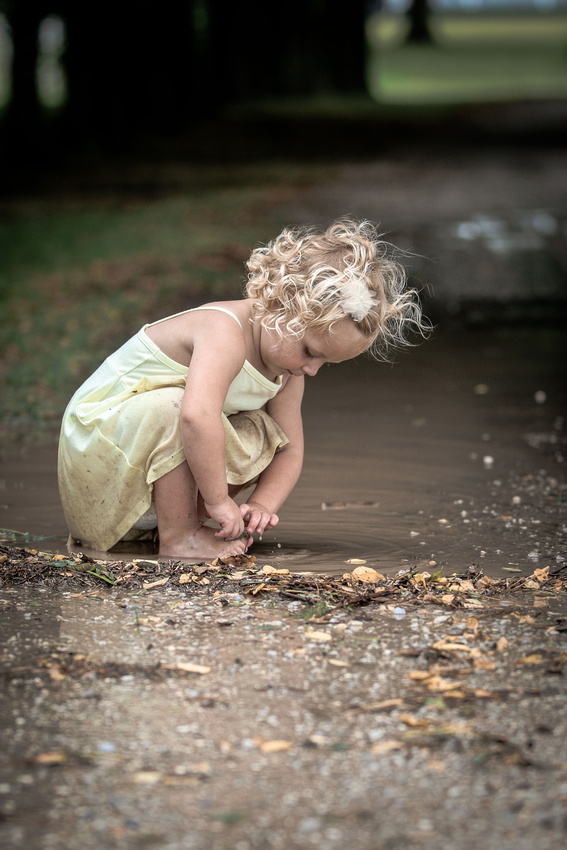 The other day Coral Mae, and I were spending the day together, and our plans of planting flowers didn't pan out because it was pouring down rain. Now, can you imagine a wild beast caged for hours just pacing back and forth to get out? That explains Coral Mae's attitude as this country kid loves to be outside. Aunt Lainey was running out of options for entertainment indoors, and my hair was quickly thinning.

I didn't know if the dress she had on was from a boutique or a hand-me down, but at this point I was willing to face her mother, and buy her a new one just to let the caged beast burn off some energy! ha!

I noticed these pretty little shallow puddles, and I just so happened to have her rain boots, although I was soon informed that rain boots must be for sissies, ha! Of course, I grabbed my camera, headed down the drive with the almost two year old beast, and all of the dogs in tow. We began stomping, and splashing, and soon that little yellow dress was covered in mud. Those blonde curls were soaked, and that little wild child was finally taming down.

If you're a mother, I commend you. The beast had to go down for a nap shortly after our puddle jumping, and I...well... I had to finish cleaning up jelly that she had decided to fling all over the kitchen that morning.

I adore the precious time I get to spend with the kids, and I have to say I'm getting pretty creative at "Beast Taming" these days... Maybe that's why the kids have been begging to stay the with Aunt "Yainey" more often,Oh no! What have I done? ha!

Hope your summer is being filled with mud pies :))