Please don't put it in my obituary I died riding an Appy...

I've been traveling quite a bit, and just returned home from West Texas. While I'm covered in bruises, and mesquite scratches, and this is fresh in my mind I just wanted to take a moment to make one simple request...

As I drove down the 18 miles of rough ranch road, and I mean so rough that you better be wearing a sports bra type rough, I was greeted by my friends. "Lainey, we've already caught Poncho for ya so you'll be ready to go in the morning" Great, I thought to myself! I was exhausted from making the trip, and it was dark so I figured I'd meet ol' Pancho in the morning. While sometimes I haul my own horses, for this trip it was just better to borrow a ranch pony since I'd be headed to the WRCA finals right after the fall works.

I was told we needed to be out of the house by 4:30 a.m. , so I wiped the sleepy from my eyes, and we headed to the barn to catch horses, and then I heard it... "Lainey, there's Pancho...the war pony" As my eyes adjusted, I was making sure I was seeing straight through the darkness. Am I really seeing an Appy? Can these be real? Oh hell, now the jokes are gonna start I thought to myself. Dora the Explorer rides an appy with a backpack... and I carry a backpack...

Growing up my Grandpa always said the only reason Indians rode an Appaloosa was to be so ticked off they'd be ready to fight once they got to the war party. Oh if he could only see me now. I had a feeling my grandpa would be rolling in his grave a little bit, but I was grateful to borrow this horse, but I was worried about the Dora the Explorer jokes that was about to commence.

( Poncho the Appy and I trailing behind above)

We arrived to the sections we were to gather, and I unloaded ol' trusty appy.I didn't know a soul there, and I was the only female in sight. The cowboys were kinda starring as they were informed I was coming, but what a colorful display I was. I was later informed "Lainey, we knew you were alright once we saw you putting on your unicorn leggings" ha! Well, might as well add more color and stand out! 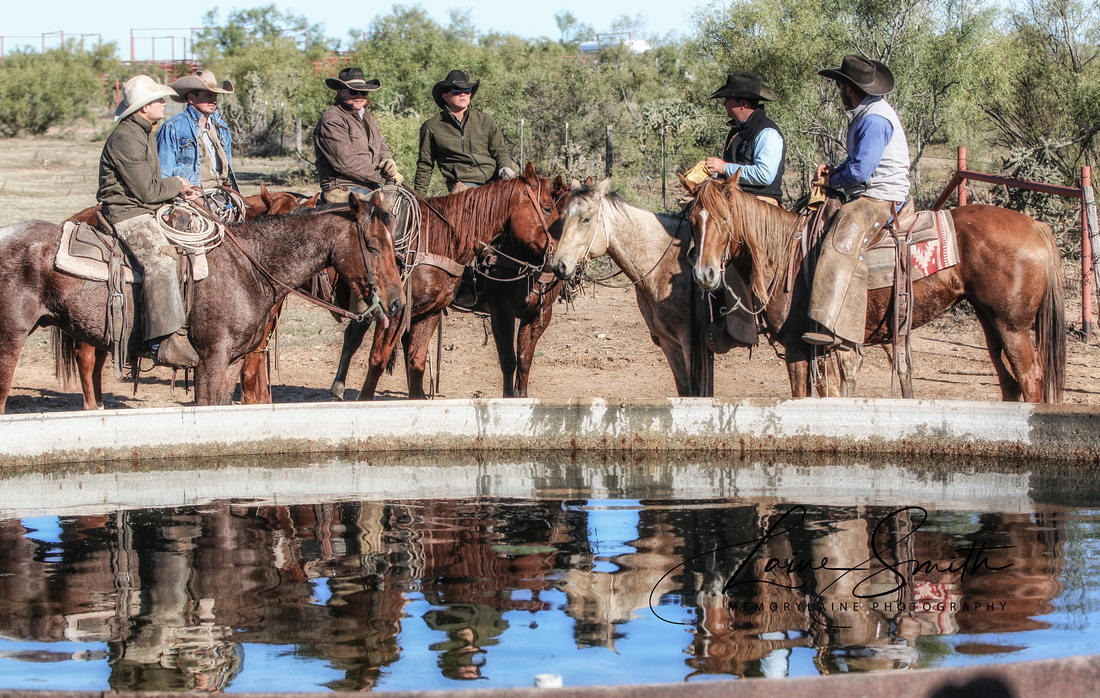 Now ol' Appy is a trusty ranch mount, but here I am in Unicorn leggings, bundled up in more layers than a grands biscuit, carrying 30 pounds of camera gear, in unfamiliar country, and riding an appy. Lord, I might die today I thought. As I climbed upon this trusty stead all I could think of was "Laine, don't you dare get bucked off, and don't you dare whine"

So I jumped in the back of the jig line, and away we went busting through mesquite brush, and jumping over cactus patches that would make an Olympic cross country horse jealous. Ol' Appy knew the country, and knew how to get around, and had a nice little trot to boot! As we came to the canyon to drop off, I just knew they'd slow down a bit, and boy was I wrong. We never busted stride, and off into the Canyon drop we went at a long trot. I couldn't show any fear, and I had been warned this country was rough, but I'm riding an Appaloosa... with 30 pounds of camera gear. So here goes nothing... 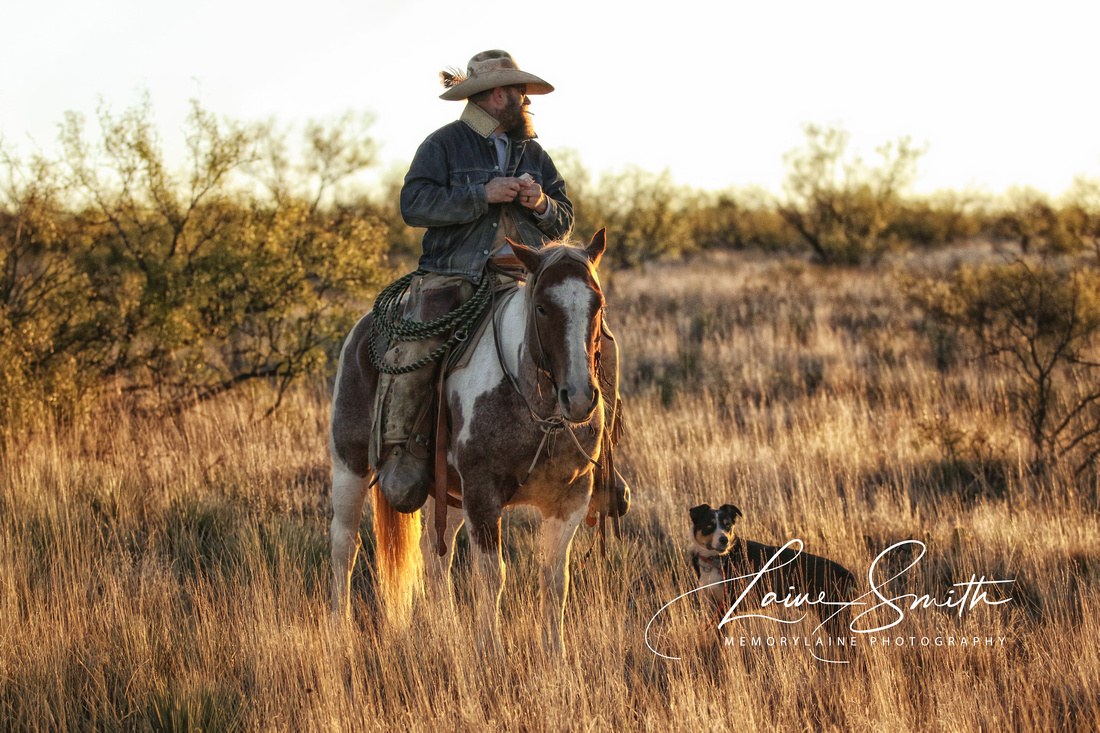 Away we went, and ol' App was pretty sure footed! I'm grateful at this point that this horse knew the country better than I did, because I think they underestimated it a little when they just called this country "Rough". I was feeling like the man from Snowy River, only I was female, and from Missouri, and we don't have canyons, or cactus... 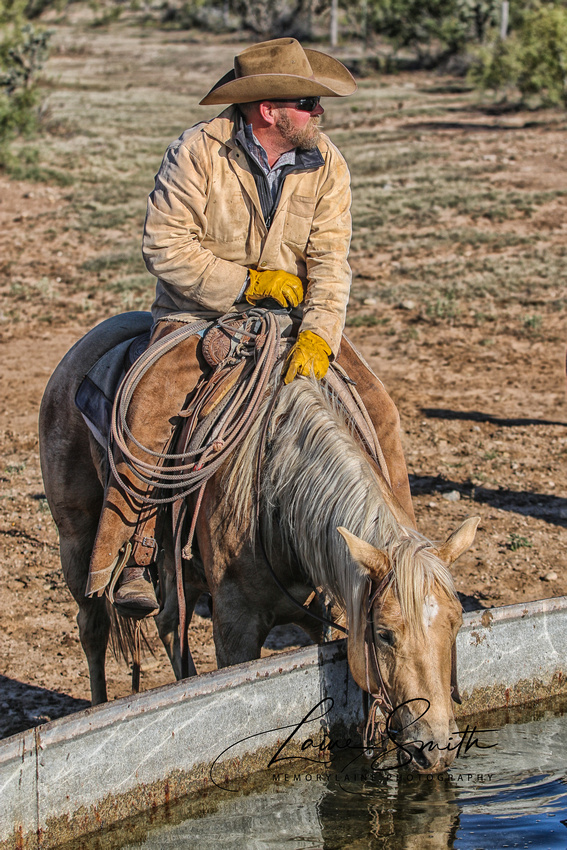 These guys that work out here are tough! Their horses are even tougher, and I was just praying we had found all the strays because I could barely see through all the mesquite!

Now you know if you go down, you must go back up, and the only way up was STRAIGHT UP! I mean, do we really have to be cowboys today? As we trotted in that canyon valley, I was trailing behind until we found the easiest way to get up the side of the canyon. Ol' Appy and I were just happy as a peach trotting along until I seen the size of the canyon we had to crawl out of. 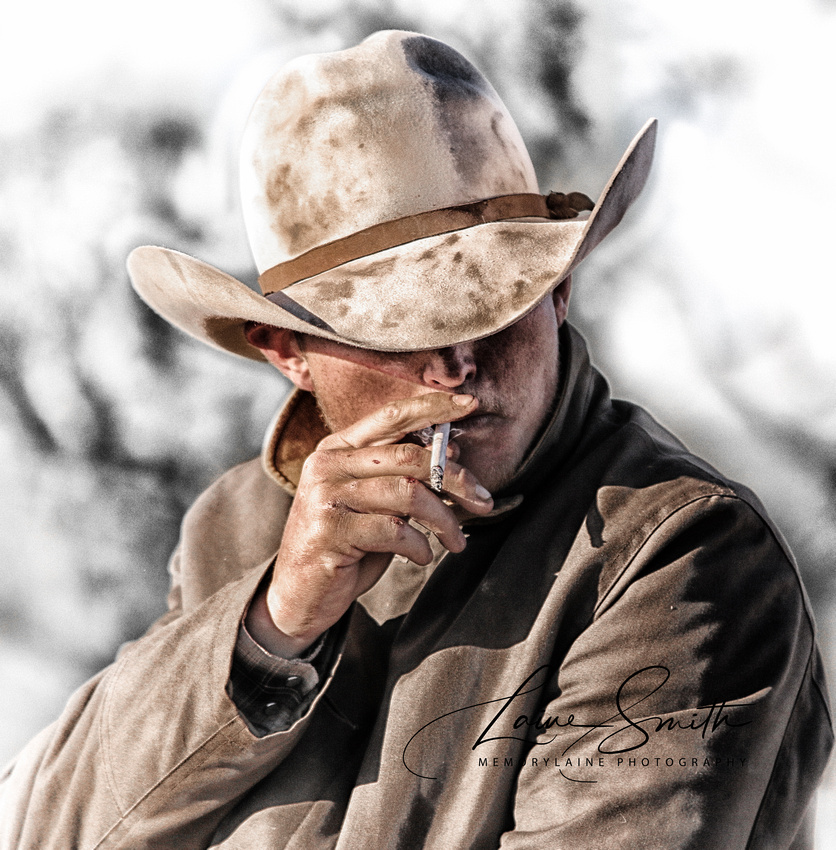 It's now or never I thought. I trailed behind one of the guys, and up and up he went. His horse lost it's footing for a moment, and I just knew my life was over. Ol' Appy had to check up a bit, and in about 2 seconds we were sliding backwards down the canyon. There was no where to go, and drop offs on both sides, and for the first time ever photographing off horseback I just knew this was it. We slid backwards for a bit, and ol' appy finally got his footing, and we got turned around, but at this point my nerves were shot. I just knew my obituary would read " She died on an Appaloosa in West Texas" and all of my friends back home would commence in the Dora the Explorer jokes for years to come.

Now friends, this is all in good fun, and I was grateful to borrow a broke ranch pony that day, and thankful ol' Appy knew the country better than I did. But Lord, please don't ever let me die on an Appaloosa, and without a little lipstick on. I just wouldn't be able to see what kind of obituary my friends would write. ha!

I'm still exhausted from our West Texas trip, and I was informed that day that it was an "easy' day... We ONLY trotted 8 miles... and they said that with a grin on their faces. I'm not sure if they were testing my ability, or my funny bone, but I'm alive, and still laughing through all the scratches & bruises.

Thanks for the trip, boys!

Sincerely the girl in Unicorn Leggings on the Appaloosa <3

Gaylyne Manns(non-registered)
The cowboy on the horse with the cigarette pic you took is my son.
I would like a couple of prints of that pic.
How do I do that? Very good by the way.
No comments posted.
Loading...
Subscribe
RSS
Recent Posts
Please don't put it in my obituary I died riding an Appy... The American Rancher: The every winter Olympic Sprinter... Winter chores or comedy show? You decide. Things you just can't UN hear... Dear Ladies of the NFR, I envy you. So you want to date a cowboy? What horse did he saddle for you? The Mysterious Ranch Pickup & Dating... Capri Camper at 70! When the fireflies dance among the fescue Which way is North?
Keywords
Ranch memorylaine ranch photography ranching wrca Creek Canyon MemoryLaine Photography Montana Horse Drive Bronc Riding Nation Cherokee Oklahoma
Archive
January February March April May June July August September October November December
© MemoryLaine
Powered by ZENFOLIO User Agreement
Cancel
Continue