" That's when she told me her family only uses a calf table, and I knew we didn't have a future..."

It's grey and gloomy here in Missouri, and I've had a quick minute to sit down and write. It seems we're in the middle of branding season, and it's a time to catch up with old friends, see a few neighbors, and swap a few tall tales. And this is exactly how this story took place. Now, before I go any further keep your funny bone alert, and a smile on your face.

I was catching up with one of my ol' buddies asking how his family was, if he's been day working a bunch, and you know just normal small chit chat when he had mentioned he finally got to take the fiery red head out on a date that he had asked numerous times. "Alright buddy!" I said. I was happy she finally gave him a chance, and before I could even speak he quickly shut me down, and said "Ya but Laine, it just didn't work out"

Now I'm confused. She had finally given him a chance, and how bad could it possibly be on a first date? He's a complete gentlemen so I knew he politely held the door, picked her up, paid for her supper, and kept his manners about him throughout the evening. So I just sat there with a confused look on my face, until he said "Her family only uses a calf table... and I knew we didn't have a future"

Now if you can imagine, I instantly busted out into laughter and tried to keep my wits about me as he began to say in a very serious tone "Laine, she said she was against branding the traditional way because any time they had tried to work cattle it never worked out right"  that was followed up with a "This is a craft I take very seriously. It's taken years horseback and being around lots of cattle to perfect this art. It's not just something that should be replaced with four wheelers and calf tables" I had to agree, and I sat there as an ear to listen. He said " What's wrong with seeing your neighbor and helping them out? What's wrong with getting together as a community and catching up? And what's wrong with a nice ranch horse that knows it's job?"  His feathers were getting fluffed, but he was absolutely correct. I'm still currently biting my tongue really hard.

I continued to bit my tongue because all I could really think about is who brings up branding cattle during supper on a first date?!?! Especially because you've asked her out 3 times! Only my buddy apparently. "Laine, her family only uses four wheelers" he said as he could hear me snicker, and then he said " We're in the heartland of America, this is tradition, this is my livelihood, I believe in helping your neighbors out, and then I found out her sister voted for Hilary and it was just too much!" he said as his voice got gruff, and huffy. And that's the exact moment I lost it, and had tears from laughter. I said " You can't hold a grudge because one of her family members voted for Hilary" "Laine, it's all just too much"

I wasn't laughing at him because I believe in everything he stands for, but I was dying laughing for the simple fact that could he not of brought up normal conversation over a casual dinner like "How was your day?" Nope, might as well just get it all out in the open, and find out where this red head stands on her agricultural views from the very beginning.

"Laine, it just didn't work out...they use calf tables" As he uttered, and shook his head.- A true story from my buddy a full time ranch hand who makes his living horseback every single day. hahaha! 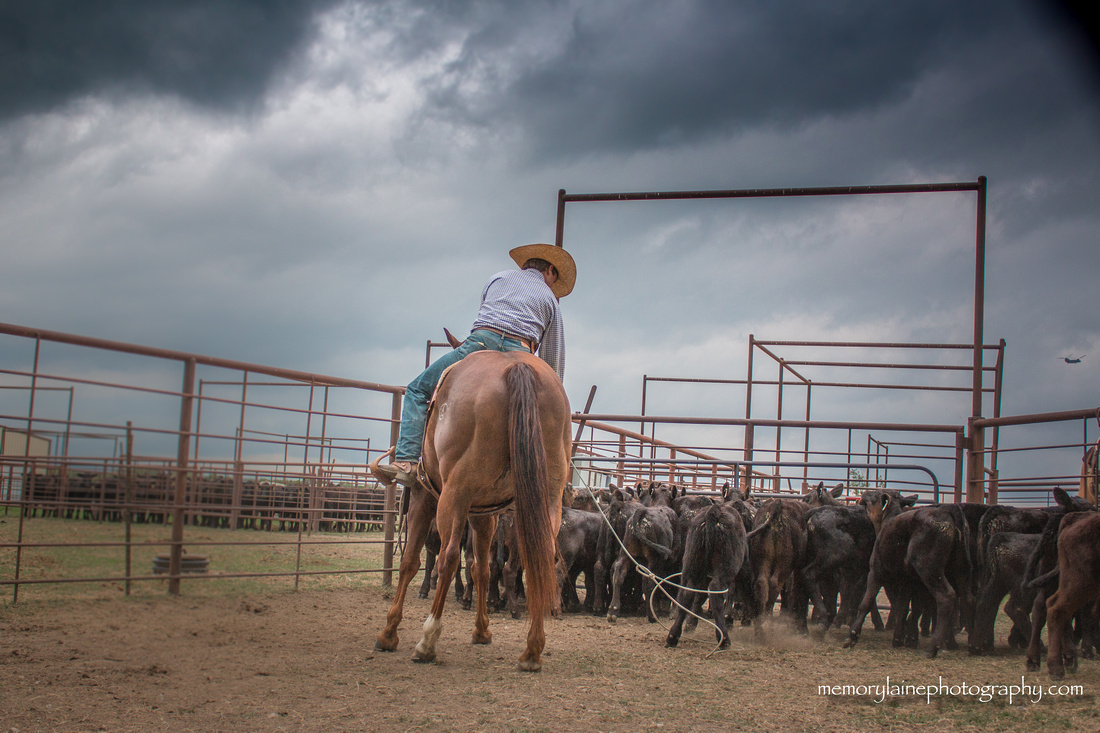 Ryan Sexson(non-registered)
Laine, do I know this fella. He sounds just like our mutual friend.
Janelle(non-registered)
Understand
Alec Deberry(non-registered)
If you have to explain, they wouldn't understand.
Erin(non-registered)
This has me laughing way too hard. I'm glad my husband said it wouldn't work out after finding out my family only uses 4wheelers and a calf table. He is cowboy to the bone and makes his living horseback. I love to watch him work and his care for all animals. I did get him to help my family brand one year and he told me never again. Lol. I love your pictures and reading your posts.
No comments posted.
Loading...
Subscribe
RSS
Recent Posts
Please don't put it in my obituary I died riding an Appy... The American Rancher: The every winter Olympic Sprinter... Winter chores or comedy show? You decide. Things you just can't UN hear... Dear Ladies of the NFR, I envy you. So you want to date a cowboy? What horse did he saddle for you? The Mysterious Ranch Pickup & Dating... Capri Camper at 70! When the fireflies dance among the fescue Which way is North?
Keywords
Ranch memorylaine ranch photography ranching wrca Creek Canyon MemoryLaine Photography Montana Horse Drive Bronc Riding Nation Cherokee Oklahoma
Archive
January February March April May June July August September October November December
© MemoryLaine
Powered by ZENFOLIO User Agreement
Cancel
Continue